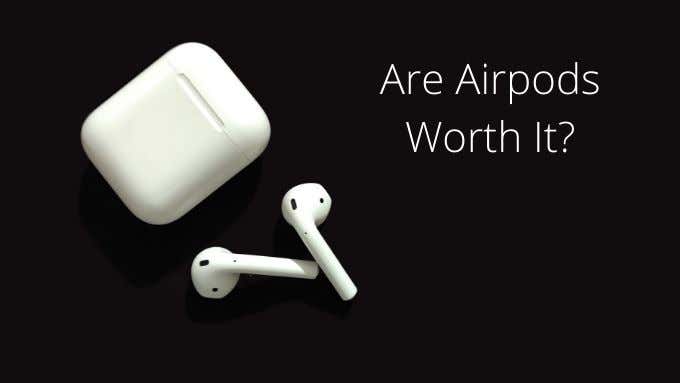 Apple is one of the most desired tech brands in the world, no doubt about it. Whenever they release a new product, even one they’ve never tried before, you can rest assured that people will line up for it.

This worship is also not undeserved. There are many products from Cupertino wizards that we love. However, that doesn’t mean Apple is untouchable. Especially since their products have a high price. When they joined the ranks of headphone manufacturers, the entry price was (and remains) high.

So, are AirPods worth it? Let’s break it down to the basics.

The advantages of the Apple family

Before we look at each of the three AirPods you can buy individually, there are some universal benefits you can enjoy regardless of which option you choose.

The main factor in the AirPods value equation depends on your investment in the Apple ecosystem. If you use AirPods with any Apple device that supports it, you’ll get superior performance and functionality. Thanks to the advanced audio processing chips of the AirPods, they pair almost instantly with Apple devices.

You can seamlessly switch, for example, from your Mac to iPhone. The amount of audio latency is also very low when using AirPods with Apple hardware. If you want to use your AirPods with anything non-Apple, you lose most of that shine, making the experience a little more mediocre.

AirPods Pro and AirPods Max also feature a new space audio technology from Apple. Unfortunately, the base model lacks this feature. For us, this is one of the coolest features of AirPods, but you need the right combination of hardware and software to enjoy it.

This feature uses the hardware in the AirPods and the device you’re using to determine their relative position relative to each other. If you’re listening to multi-channel audio that would usually be played through surround speakers, the system creates virtual speakers.

Those virtual sound sources remain placed relative to the position of the head. So if you turn your head, you will feel that the surround speaker channels stay where they are. The result is an experience very similar to a multi-speaker theater setup.

Unfortunately, no current Apple TV or Mac model supports the feature. Probably because they don’t have the positional technology to make it work. Finally, the apps themselves must support the spatial audio function. The list of compatible third-party apps is small, but it’s growing.

The entry-level AirPods product is now in its second generation, but the difference between the two generations is negligible. They sound and look the same, with most of the improvements under the hood, thanks to a chip update.

As for the AirPods themselves, these have proven to be one of the most popular products Apple has ever made. People like them and the design is like nothing else out there.

The first thing you should know is that playback quality is very central. Since AirPods don’t create a seal with the ear canal, you can hear everything happening around you. Which is a good feature from a safety point of view.

Of course, wireless earbuds like the Galaxy Buds + and other similar products offer a transparency mode. This allows you to feel what’s going on around you when you want.

The AirPods also have mediocre battery life at 5 hours and lack water or sweat resistance. Is the base model of AirPods worth it? We don’t think so.

Since the AirPods Pro uses a more traditional silicone tip design, you get a good seal with the ear canal. This in itself guarantees a much better audio experience. AirPods Pro also offers active noise cancellation, a transparency mode and liquid resistance.

These are therefore wireless gems that offer parity of functionality with the competition. However, that still leaves the price high when compared to other very similar devices from other brands. The audio quality of the AirPods Pro will be more than enough for non-audiophile listeners. Yet we can say the same for most of the competing buds. Products like the Sony WF-1000XM3 offer better audio and better noise cancellation at a much lower price.

So why buy AirPods Pro? The low level of audio latency, Apple’s spatial audio and integration with iOS would be the biggest selling point for us. If these factors don’t interest you, then AirPods Pro isn’t worth it.

Now we come to the great Kahuna. Apple’s recently released AirPods Max are an over-ear design with a few innovations on offer. For example, the pinnae can be removed easily, as they are held together by magnets. So installing new ones takes seconds without any frustration.

The all-metal design promises years of operation. The tactile metal control crown is a great idea. The touch controls on the headphones are generally terrible, and having something you can operate on hearing is a big plus.

We haven’t had a chance to hear AirPods Max, but everyone who has talks about the sound. These are not high-end reference headphones, but as wireless headphones they take up a very premium space. The problem is that Sony’s WH-1000XM4 offers incredible noise cancellation and sound quality comparable to $ 200 less.

Apple can do better

This is Apple’s first attempt at making headphones. If you keep that in mind, they have done a truly amazing job. We don’t think anyone would be disappointed with the performance of any AirPods model, but they would be easier to recommend if they were a little less expensive.

As things stand, AirPods aren’t worth it in the sense that the price doesn’t seem justified. However, if money doesn’t interest you and you are immersed in the Apple ecosystem, it will enrich the experience.

In 2021, we expect Apple to launch a new generation of AirPods. These are likely to be the ones to get, so if you can hold out until the bright new products arrive, you should. After all, history has shown that Apple usually gets their own products on the second try, and we expect the AirPods to be the same.