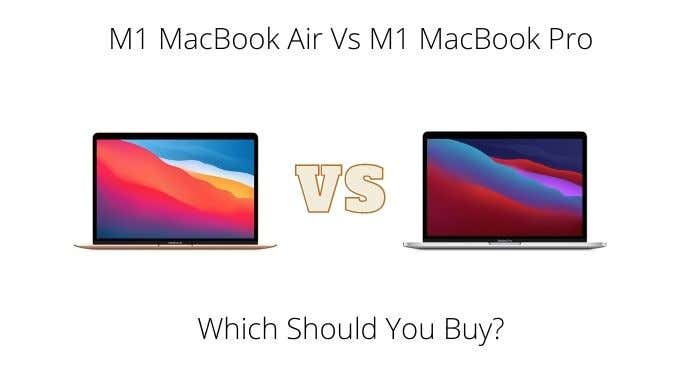 Apple has started a computer revolution. They ditched Intel CPUs in exchange for a seriously upgraded version of the silicon you’ll find in iPhones and iPads. It’s a big deal and if you want to know what makes this new Apple “M1” chip so special, check out our Apple M1 versus Intel i7 article before reading the rest of this.

Assuming you want to buy one of the new M1 MacBook 13 “options, which one should you get? There’s at least a $ 300 price difference based on this decision, but there’s more than money. So when it comes to MacBook Air M1 vs MacBook Pro M1, which one to spend your money on?

The M1 chip: under the hood

One of the main reasons there is some confusion between these two MacBook models is because they appear to be virtually identical under the hood. The truth is that both of these machines are essentially the same.

The only difference is that the base model M1 Air has seven GPU cores, while all other MacBook M1s have eight. In terms of the actual central processor, it is the same unit. There is only one design of the M1 processor.

Between the two MacBooks, you get the same RAM and SSD options and two Thunderbolt 3 ports. The most noticeable differences are on the outside, starting with the fact that the MacBook Air M1 is completely fanless.

Just like an iPad, the MacBook Air M1 is passively cooled. There is no fan and there are no vents. This is because the M1 is so energy efficient that it can run without generating a lot of heat.

What’s so cool about not having a fan? Consider the following:

While MacBook Air M1 computers haven’t been out of use long enough to provide evidence, we expect these computers to be exceptionally reliable. Fans eventually fail, but with the Air the problem goes away.

The noise aspect is less important as the MacBook Pro M1’s fan seems to hardly ever turn on unless you’re running heavy, sustained workloads.

The weight difference between the MacBooks M1 is negligible. Also, while the Air is a little thinner, it’s not the kind of difference that will affect your ability to slip it into a bag. The real difference, as always, is that the Air has a tapered, wedge-shaped body. Rather than the Pro’s thicker, more professional chassis.

Some people find the wedge shape offers better typing ergonomics, so if you’re a heavy typist, keep that in mind.

If the two computer models have exactly the same processor, why would there be a performance difference? Once again, the answer to this question is linked to the presence of a fan. Active cooling allows the M1 processor to run at full speed on all cores indefinitely. Without a fan, heat will build up over time and CPU speed will need to be throttled to get things back under control.

However, this takes some time, so for CPU tasks that only require short bursts of CPU effort, there is no difference in performance between the two computers. However, if you’re doing something like exporting your large video project, the MacBook Air will lag behind. The difference in peak performance under load isn’t huge, but it’s noticeable.

The Touch Bar appears to be a feature that people hate or love, with little space in between. So it’s hard to say whether you will consider it a pro or a con in this comparison. Instead of the Touch Bar, the MacBook Air M1 has a normal row of keys. The choice is truly yours.

Although you should note that the MacBook Pro M1 comes with a physical escape key. This solves a common complaint from Touch Bar haters.

All MacBook M1s have significantly improved battery life, compared to the Intel models they replace. However, there is also a noticeable difference between the two M1 laptop options.

The Air is rated for use between 15 and 18 hours, depending on what you’re doing. Less if you’re really asking for it for heavy lifting. For the same set of scenarios, the Pro is rated for between 17 and 20 hours. So you will have an average of two more hours.

Both the MacBook Air and the MacBook Pro have excellent screens and speakers. It’s just that the Pro is a little better. With 100 more “nits” of brightness and a body and speakers that deliver more sonic power, the Pro delivers more. The MacBook Air is no slouch though, and still offers pretty much every other laptop in its price range in this department.

If you want something other than Space Gray or Silver, then Air offers Gold as an option. We wish there were more colors in both model lines, but the Air slightly outperforms the Pro in this department.

Who should buy the MacBook M1 Air?

We think the vast majority of users looking for a 13-inch MacBook should buy the Air. Previous MacBook Air models were significantly less powerful than the 13 “Pro. Which made them practical only for light computing tasks. Now, whatever the 13” Pro can do, the Air can do the same. Although a little slower in some cases.

If you can live without the touch bar and slightly better screen and sound, we recommend saving $ 300 or spending it on a memory or RAM upgrade instead.

Who should buy the MacBook M1 Pro?

If you are someone who really needs your MacBook for more professional purposes, like video editing or other heavy tasks. Consider the M1 MacBook Pro 13. Screen and speaker upgrades will make your life more enjoyable first and foremost. The big improvement here is the actively cooled M1 CPU.

If you’re planning on crunching numbers or exporting video projects that will last for more than ten to fifteen minutes, then the M1 MacBook Pro 13 will outperform the M1 MacBook Air. Also, don’t forget that the Pro has an additional GPU core over the base $ 999 Air model. In applications (such as video editors) that use GPU acceleration, this is an additional source of extra performance.

The Pro is clearly the superior machine and if you don’t mind the price difference you own the most powerful laptop in this form factor ever made. However, for most people, the gap between these two models just doesn’t add up to the price difference. So consider carefully whether the marginal improvements offered by the Pro model are worth the asking price.