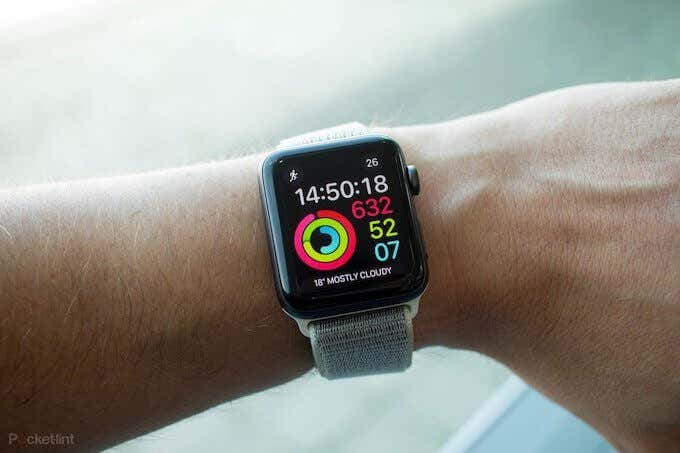 The Apple Watch is one of the most advanced wearables around, outperforming any Fitbit or smartwatch on the market. On average, a single charge of the Apple Watch should last 18 hours. The charge will last for a standard day of heavy use, but if you moderate your usage to just a few basic tasks, like checking passages and text messages, you can potentially get two days of use on a single charge.

How to charge your Apple Watch

The basic white charger that comes with the watch has two sides: one flat and one that folds inward. The side with the depression is the one you want to attach to the back of the watch. Once aligned, the magnets will lock them in place. As long as the charger is connected to the computer or power brick, the watch will start charging your Apple Watch immediately.

You will know that the watch has started charging because it will beep. If it’s in silent mode, you’ll see a lightning bolt appear on the front of the watch. This will be red or green, depending on how much power the watch needs. In some cases, the lightning bolt may not appear at all for several minutes until the watch has sufficient charge, in which case you are likely to see an Apple logo.

Once you see this lightning bolt symbol, all you have to do is wait. The watch is charging.

There are several ways to know how much charging time is left. On average, the Apple Watch takes two hours to fully charge. If you are in a hurry, 1.5 hours will get you to 80% charge.

To check how much time is left, first look for the charging icon in the upper left corner of the screen. It looks like a progress bar and gives you a rough idea of ​​how long the charge is. On the other hand, you can add a battery icon on the watch face itself which will give you an actual percentage amount instead of a bar with no number.

Charge your Apple Watch without the charger

You can charge your Apple Watch without using the standard charger. There are several third-party “stations” on the market that allow you to charge your iPhone, Apple Watch, and Airpods in one place.

Although these devices are different, they follow the same basic idea. Each will have a designated area for their device. Read the instructions provided and place the watch on the appropriate charging pad.

If you don’t have the instructions, don’t worry. In most cases, the difference in size between the three devices these stations can charge makes it obvious which goes where. These stations are great for organizing all of your devices in one place, but be careful when shopping. Make sure the station you buy allows for the correct power throughput for each device.

If you are interested in getting a charging station for your iPhone and Apple Watch, these are some of the best options on the market.

Belkin’s two-in-one charger has a clean, modern look and allows users to charge all modern iPhones and Apple Watches at the same time. The charger has a built-in magnetic charging pad for Apple Watch and a Lightning connector for iPhone.

The coolest feature of this charging stand is the adjustable Lightning cable which allows users to extend or retract the length of the cable to fit most cases.

Mophie’s 3-in-1 Wireless Charging Pad features a sleek and simple look and lets you charge your iPhone, Apple Watch, and AirPods at the same time. The Mophie charger is designed to handle cases up to 3mm thick and has fast charging capabilities that will fill your devices in no time.

It has a suede top that protects your devices as they charge, but this whole class comes at a hefty price tag: $ 112.

If you’re looking for a two-in-one charger on a budget, the Mercase Universal Aluminum Desk Mount is a great option. At just $ 16, the case is much cheaper than its competitors but still has a solid build.

Your Apple Watch charges at the top of the case, while the phone is positioned to the side with only a small lip holding it in place. This makes this case the perfect option for watching movies or YouTube on your phone while it’s charging.

Many two-in-one chargers take up a lot of space, but the Twelve South HiRise Duet takes a different approach that sets it apart from the crowd.

Instead of placing the iPhone at an oblique angle, HiRise Duet sees it standing on top of your Apple Watch. The watch charges at the base of the stand, with the iPhone mounted on a large stand above it. The charging station costs $ 60 on Amazon.

The Beacoo 3-in-1 Wireless Charger is another affordable option for a charging station. At $ 27, it’s compatible with all Qi-enabled devices (including Samsung phones, so it’s not limited to Apple products).

It has a 10W fast charger, an adjustable charging board, and a solid construction that ensures your Apple Watch stays in place exactly where it needs to be. Your AirPods fit in a pocket under the watch.

What is your charging station to charge your Apple Watch? Let us know in the comments below.